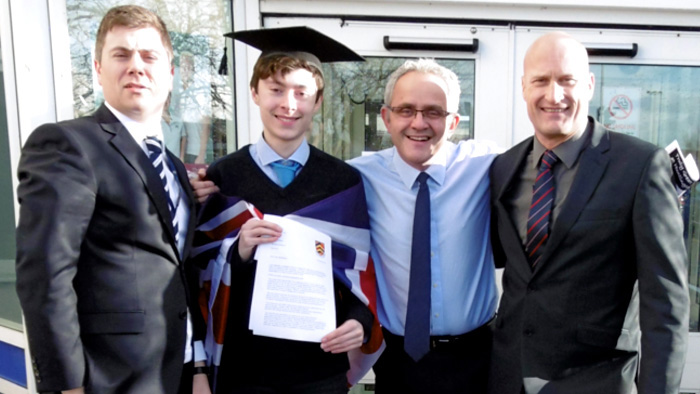 We first met Julius Backhouse on a cold and windy night at Michelstadt Gymnasium in ‘The Odenwald’ in 2010 where we were presenting to teachers, parents and students on long and short educational stays in York.

Julius sat transfixed listening to every word and his imagination began to offer a thousand opportunities far away from his life in Michelstadt. After the presentation Julius and his father gleaned yet more information and within a few hours Julius was booked onto the ‘Embrace England’ short summer stay... his dream had started!

The following summer saw Julius arrive as a 13 year old boy eager to explore York and we quickly realised he was an exceptional student. Such was the impact of that first summer stay,Julius returned for three more short summer stays and this culminated in his dream changing. He now wanted to return to Huntington School as a 16 year old to study ‘A’ levels and then apply to a UK University.

Julius knew he would have to work to a standard that was extremely high and all in his second language. His English improved to such an extent that he began to achieve ‘A’ grades in all of his assignments and he then matched these grades in his ‘A level’ exams. Suddenly Julius began to change his dream again... he now wanted to apply to OXFORD and study a Science degree!

Huntington School got to work and gave him all the extra support necessary to ensure he had the best chance to gain a place at one of the world’s most famous universities.

Ready and with nervous anticipation, Julius set off for Oxford on one autumn morning in 2014 to start days of entrance exams and intense interviews conducted by courteous but ruthless inquisitors! Could this shy boy from ‘The Odenwald’ achieve the dream that had started evolving five years previously...

Julius Backhouse... we salute you!